What is Gauge Theory and how can it be used in trading?

Well, when Eric Weinstein introduced the subject of Gauge Theory and Hopf fibrations to Joe Rogan a few years ago, he began with: “When people say the universe is expanding… What the F#$% does that mean?”

That’s the kind of deep we’re talking about.

What is Gauge Theory and Hopf Fibrations? 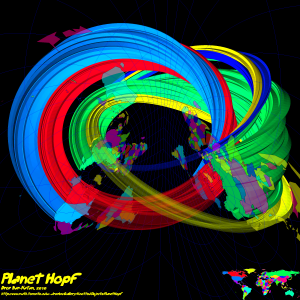 A general feature of these field theories is that the fundamental fields cannot be directly measured; however, some associated quantities can be measured, such as charges, energies, and velocities. For example, say you cannot measure the diameter of a lead ball, but you can determine how many lead balls, which are equal in every way, are required to make a pound. Using the number of balls, the elemental mass of lead, and the formula for calculating the volume of a sphere from its diameter, one could indirectly determine the diameter of a single lead ball.

Ok, but why is an asset manager talking about an expanding universe and the analog of a two dimensional sphere sitting in three dim… or whatever this is?

Good question. Gauge Theory plays a very important role in finance and modeling… specifically in pattern recognition and the identification of fractal patterns (that’s all we do).

First, let us rewrite the description above in a language that relates specifically to the identification of fractals in market data. A general feature of these field theories is that fractal patterns cannot be directly measured; however, some associated quantities can be measured, such as price, volume, momentum and elapsed time. For example, say you cannot measure the length of a fractal, but you can determine how much volume and momentum is required to create prices, which are equal in every way, are required to make a fractal. Using the price and volume, the elemental mass of the markets, and the formula for calculating the momentum of a market, one could indirectly determine the fractal pattern of the underlying market.

An example where the $ is the Lagrangian:

Let us start with several key concepts in finance. First, economic activity beyond direct barter involves a freedom to choose certain conventions. For example, direct barter of 2 apples for 3 oranges involves no conventions. However, sup-pose a trader sells 2 apples at $0.30 each, and then uses the proceeds to buy 3 oranges at $0.20 each. He achieves the same end result as in the direct barter, but in the process encounters two prices which are convention dependent.

Who has a headache now?

Math and physics, specifically field and electromagnetic theories and geometry have played an enormous role in finance over the last 30 years. Many hedge funds use these applications to access risk, identify arbitrage and determine exposure when entering a trade. Perhaps the most famous of these is Jim Simons’ Renaissance Technologies.

“Renaissance has been called “the best physics and mathematics department in the world” and, according to Weatherall, “avoids hiring anyone with even the slightest whiff of Wall Street bona fides”.— Sarfraz Manzoor, The Telegraph, 2013

As access to data and computing power continue to increase, expect to find more firms turning to scientists rather than traders to generate results. Want to learn more about fractalerts? Fill in the form on our home page and a member of our team would be happy to give you a call or engage via email. Follow our trades. Leave the math to us.